Polyurethane grout is a liquid that with the addition of a small quantity of water and an accelerator expands multiple times its initial volume to create a foam that fills voids and cracks.

At a 3-story building in downtown Honolulu with a full basement fronting Queen Street, chloride contaminated tidal water infiltrated into the basement through multiple locations, including slab cracks, the slab/wall interface, and wall cracks.  The flooding condition repeated during high tides.  Polyurethane grout injection was selected to curtail the water infiltration.  Subsequent spall repair﻿ was then doable.

In Kailua, Oahu, sand extends several hundred yards mauka from the beach.  We used this same product to fill a nominal 2” void beneath much of the slab on grade of a residence that resulted when the underlying sand consolidated over multiple years due to in no small part to the vibration occasioned by cars and trucks traversing the street in front of the residence.  The resulting void caused portions of the house slab to deflect and crack.  Polyurethane grout injection curtailed the slab deflection problem by filling the void below the slab and providing support for the concrete.﻿ 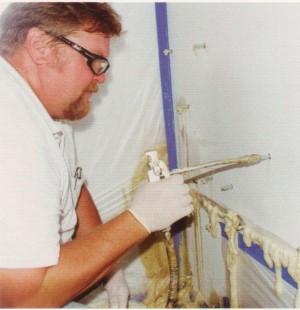 On multiple occasions our crews have injected concrete block walls in split level homes to curtail water infiltration through the block wall.  In these situations the exterior waterproofing membrane either failed or was never applied - a not uncommon situation.  Even in new residential construction and due to cost, a waterproofing membrane is often omitted or a low cost installation is provided.

When water infiltration does occur, excavation behind the wall of the split level home to allow for the application of a new membrane is not an option, thus polyurethane injection from the interior side is often the most effective and successful remedial approach.

Whether for soil stabilization or leak remediation, polyurethane grout is often the product of choice.  We have performed scores of such repairs.