﻿Epoxy injection in the construction industry was used initially to structurally repair and restore cracked concrete and it is still often used for that purpose; however, the majority of today’s crack injection is for structural preservation and, especially in Hawaii, leak mitigation.  In all of these situations, the injection resin is a two-component material (mix Part A and Part B).  After injection into the cracked concrete, the mixed material hardens and results in both a higher compressive strength and tensile strength than the original concrete.

One of the more interesting structurally oriented repairs we performed was at the one-time Bank of Hawaii Building (now the Waikiki Galleria Tower) at 2222 Kalakaua Avenue in Waikiki.  Several years ago Woolworth’s occupied much of the ground floor and also used the rear of the 2nd floor for storage, an area that at the time did not require a sprinkler system.  Stuffed with flammable stock, the large storage room caught fire and the intense heat literally caused the surrounding concrete walls to balloon outwards resulting in thousands of lineal feet of cracks due to the stress of the outward expansion.  After the fire was extinguished and the space cooled down, the walls relaxed and returned to their original configuration; however, a major concern was structural restoration of the building walls and the myriad of now ‘closed’ cracks.

Epoxy injection and RCM Construction were the remedy of choice.  RCM crews hung suspended scaffolding from the exterior and erected framing scaffold and ladders in the interior.  Weeks were expended injecting the hairline cracks.

Subsequent to the injection, several openings were sawcut through the thick concrete walls to accommodate new windows.  The Structural Engineer, Ray Keuning, expressed great delight when he was able to verify that full depth penetration of injection resin into the hairline cracks was achieved by our crew.

Much of the epoxy injection work performed in Hawaii is leak related, often through hairline cracks in below grade perimeter walls or sometimes through cracks in a lanai slab or in an overhead concrete slab with planting areas above.  Epoxy injection is commonly the remedy of choice.

RCM Construction has performed on many, many projects to curtail water infiltration through cracks in concrete.

A project we completed a few years ago was major leakage through the gunited walls of the 3-story below grade parking basement of the old Mitsukoshi Building in Waikiki (subsequently renamed the ANA Building, Kalakaua Business Center and presently the Bank of Hawaii Waikiki Center).  The leakage also resulted in concrete spalling.  Replete with cracks that allowed water infiltration that flooded the lower parking level, our crews injected literally thousands of feet of cracks.

This project was written-up in Building Management Hawaii, a copy of which is attached below.

In the early days of epoxy injection when resins were thicker with relatively short pot lives, high-pressure machines were developed for injection into relatively wide cracks.  The hairline cracks that we commonly inject today were often bypassed.  If injected, they seldom received full penetration due to the thicker and qucker to cure resins despite the high pressure used.  Flow into the hairline cracks was reduced significantly due to the resulting skin friction in the narrow crack.

Specifications for high-pressure technique were typically written (and are yet common today) to require the applicator to start injection at the lowest level port.  When resin flowed out from the port above, the applicator was to move the higher port and repeat the process.

Unfortunately, this technique often achieved penetration only along the portion of crack nearest the surface. Water infiltration could still penetrate the backside of the crack and lead to rusting reinforcing steel and subsequent concrete spall repair.

Our low-pressure injection system utilizes low viscosity, long pot life resins and individual capsules, each of which allow for injection to continue at each port for 2 to 3 or even longer depending upon temperature.  This better insures full depth penetration. 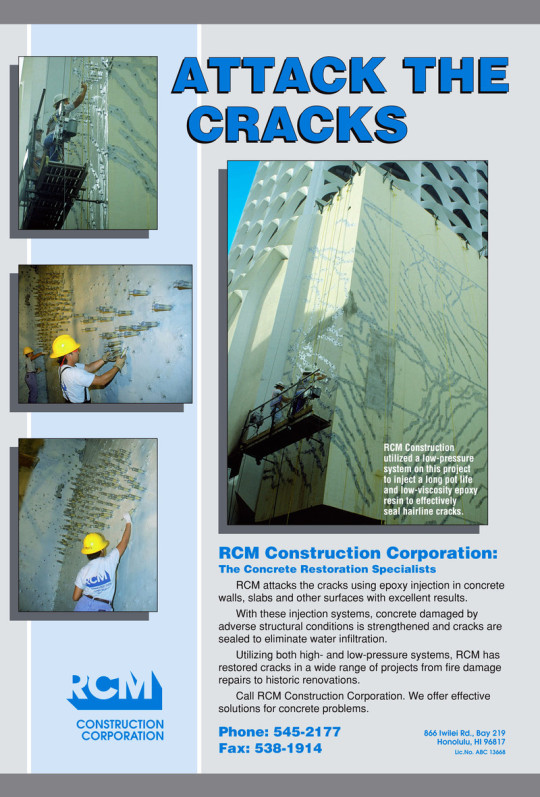